If I were to tell you that the Golden State Warriors would be competing for the number one pick in the NBA Draft after going to five-straight NBA Finals, most NBA fans would have told me there was no way that was possible.

Well, Kevin Durant took his talents to Brooklyn but sat out the entire 2020 season with an injury. Klay Thompson also sat out after an injury in the NBA Finals against the Toronto Raptors. And Stephen Curry broke his hand en route to missing most of the 2020 season before the NBA would be suspended and potentially cancelled.

This upcoming NBA Draft class is a polar opposite of last season. Zion Williamson, Ja Morant, and RJ Barrett were all set to go in the top-three regardless of what teams were up there just due to their pure talent alone. In this draft however, there can be a mixed bag of who you think is in the top-three prospects. And without the NCAA Tournament to help some prospects, much like Jarrett Culver last season, it made things even more difficult.

For the Warriors, scoring and a big are their two biggest needs. In this draft, the two players that fit that bill would be University of Georgia G/F Anthony Edwards and Memphis C James Wiseman. 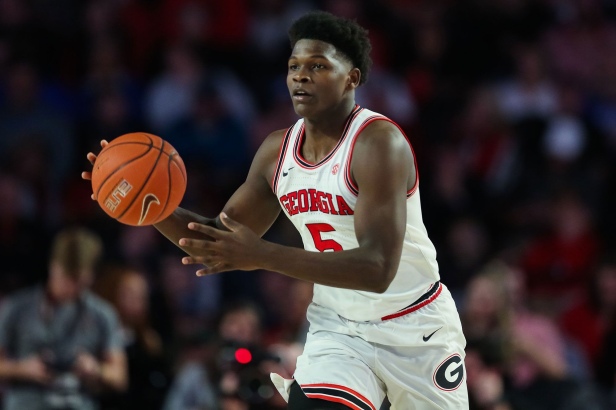 Let’s start with Edwards. The guard out of Atlanta stayed home for his lone college season and had an impressive season while his team overall did not. Edwards scored 19.1 points per game in 32 contests while also grabbing 5.2 rebounds per game while shooting 40.2% from the field with a not so impressive 29.4% from beyond the arc.

With the No. 1 pick in SLAM's 2020 NBA mock draft, the Golden State Warriors select Anthony Edwards.

Follow along as we reveal one pick per day: https://t.co/b3CyXVR92u pic.twitter.com/MAADLQUFaC

Edwards is much more of a scorer rather than a shooter, using his insane athleticism to get the basket and score contested or draw fouls on a consistent basis. Many draft experts have compared Edwards to Victor Oladipo. And for some backstory, the reasoning for Edwards attending UGA was to stay home and play with head coach Tom Crean, who once coached at Indiana and coached Oladipo, a player Edwards looks up too.

Standing at 6-foot-5, Edwards can play the two or the three for the Warriors which would likely move Andrew Wiggins to the bench if he is still in Golden State, thus improving the bench for the Warriors immediately and giving Edwards starting time around two future Hall of Famers.

Now let’s move to Wiseman. Wiseman got to play very limited time at Memphis before deciding to leave amid NCAA tampering allegations involving himself, his family, and Head Coach Penny Hardaway.

That is neither here nor there and is irrelevant at this point because Wiseman himself is a talented young center. In his three collegiate games, Wiseman averaged 19.7 points per game, 10.7 rebounds per game and shot 76.9% from the field along with 3.0 blocks per game.

His strengths would suit the Warriors very well. He has a 7-foot-4 inch wingspan, shoots the ball well, and can spread the floor and shoot from mid-range or the three in moderation to keep defenders honest. The pick-and-roll is also very important in Golden State’s offense and due to his size Wiseman can perform the pick-and-roll or pick-and-pop effectively all night.

Compared by some to David Robinson, James Wiseman perfectly fits the Warriors' biggest need in the 2020 NBA Draft (via @loganmmurdock)https://t.co/VywCYDrpFi pic.twitter.com/x1xb3opirb

One of the only red flags for Wiseman is his defensive ability and with his lack of playing time in college. There was no sense that it ever truly improved and the Warriors need defensive help inside as well as their interior defense has been terrible this season. His scoring and athleticism more than make up for it though and head coach Steve Kerr could easily teach Wiseman how to be an impressive defender.

Of the two needs for the Warriors, a scoring big is more of a need. But in terms of who the Warriors would likely take at number one overall, the consensus choice is more than likely Anthony Edwards. Edwards has more upside than Wiseman and if he can improve his outside shooting, he could be impossible to stop around Curry, Thompson, and Wiggins and turn himself into a very solid NBA scorer.

Looking at a potential lineup including Edwards could make the Warriors scary good next season in the Western Conference.

That lineup could compete in the Western Conference. And with the draft more than likely being delayed, we will see what the Warriors decide to do if they get the number one overall pick. But if they do, they should take Anthony Edwards in a hurry.