Kristaps Porzingis is coming off of one of the worst injuries a basketball player could possibly have; a torn ACL. After missing the entire 2018-2019 season rehabbing the injury, Porzingis has been expected to come back stronger than ever and hopefully start a new leaf in Dallas playing alongside Luka Doncic.

Porzingis made his official return to the basketball floor in a preseason game in Detroit against the Pistons. Going into the game, many didn’t expect much from the 7 foot big as it was his first time back on the court and due to being a preseason game. Despite those circumstances though, Porzingis played a very decent game scoring 18 points in 19 minutes of action. With a couple of three pointers and even a outback dunk from that game, it looked as if Porzingis didn’t miss a beat as people expcected much success out of him once the regular season began.

Many have expected the Mavs to be a playoff contender from the beginning of the season. With a healthy Luka Doncic alongside Porzingis being back, Mavs fans were finally able to have something to cheer about post-Dirk Nowitzki era. The Mavs have been much impressive this season thanks to Luka’s stellar numbers. But his running mate seems to be left behind as Porzingis seems to still be adjusting to his new role in Dallas. 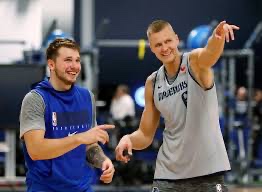 Although Porzingis is averaging 17 ppg, his field goal percentage stands at 39% as of now. It seems as if he cannot find a rhythm of his own and is getting exposed by opposing bigs on both offense and defense. For a big man like Porzingis who has the ability to space the floor and shoot the ball from deep range, 39% is awfully horrendous for a guy of his skill. He had a great start to the season after scoring 32 against the Blazers and 24 points against the Pelicans. But since that time early in the season he seems to have lost his flow and cannot get into a rhythm of his own. As the season progresses, the big man has got to find ways to become more assertive and become a difference maker for his team.

If Kristaps Porzingis ever starts hitting shots, the Mavericks should be pretty good. Because my goodness, they get that guy a lot of good looks.

There are many though that do believe that Porzingis’ injury has absolutely nothing to do with his recent play. Many NBA analysts and former players have been stating that the big man’s off court issues have been a big distraction for him and has been the reason for his poor performance as of late. Former NBA Champion Kendrick Perkins recently called Porzingis a “diva” a couple weeks ago. After everything that happened during his time in New York and also his incident back home with a fan, everyone wonders whether Porzingis is allowing his emotions and personal life affect his play recently.

It is time for Porzingis to change the narrative of himself. He’s in a new city now playing with an elite all-around player and he has the opportunity to be a Robin to Luka’s Batman. With those two elite talents playing at a high level on a nightly basis, the Mavericks could potentially become a championship contender in the near future and they should continue to put the NBA on notice (especially out west). Luka Doncic will continue to get better with time and will potentially win an MVP Award in the future. But in order for him to be a champion, he’ll need his running mate to produce for his team; and that is the job that Porzingis is required to do for Dallas.