The Brooklyn Nets have been a mixed-bag to start the year. They have had ups-and-downs already, and we’re only two months into the season. They started off the year 4-7 with media hitting these team at all angles.

Questions came in yet again on you-know-who about leadership and being the best player on a team. However, coming into a new organization takes time. That’s not why I’m writing this. With Kyrie Irving out with a shoulder injury, someone else has stepped up to the plate. The sixth man, Spencer Dinwiddie.

Dinwiddie has been on a tear since taking the starting role. His play has helped the Nets stay in playoff contention out East with solid competition this year. It matters that much more given the rough start Dinwiddie has had this year. In a lot of losses this year, he struggled to find a basket and was at points unplayable. Dinwiddie has found his stroke and kept that same play up that he has entered Brooklyn. 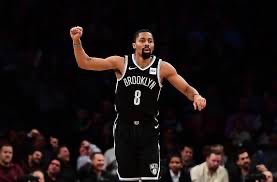 It’s also more impressive given the fact of where Dinwiddie started. He was drafted in the second round to the Pistons after tearing his ACL his junior year at Colorado University. He struggled to find consistent minutes with them, and as a result had to show out in the G-League team with the Bulls. He was never brought up and was waived by them in October of 2016. The Nets signed him in December of 2016, and ever since then it’s been smooth-sailing. Dinwiddie proved himself each year with Brooklyn as a legitimate role-player that can get you a bucket as well as make a key play in crunch-time.

And it hasn’t just been Dinwiddie that has stepped up: Jarrett Allen, Garrett Temple and Taurean Prince have come through and played tough, gritty basketball. Yesterday afternoon, they took a very good Celtics team to the limit and won by five. They are winning games they should win and are making great plays in big moments.

No one knows when Irving comes back, this shoulder could be more serious than we know. But the Nets are figuring out ways to win and stay competitive without him and Caris LeVert. Will this last? Who really knows. One thing is certain though; if Dinwiddie is there he will have something to say about it. He has been the savior for this Nets team early in the season.