Baron Davis was just kid from South Central, Los Angeles trying to survive every day. Growing up with his grandparents, Luke and Lela Nicholson, they made sure he didn’t have to go far to learn the game of basketball. Davis’ grandfather built a basketball hoop in the backyard where kids would go to play pickup and for Davis to work on his game. He was just a short child trying to survive one day at a time. Now he’s regarded as one of the most athletic Point Guard’s the game has ever seen. 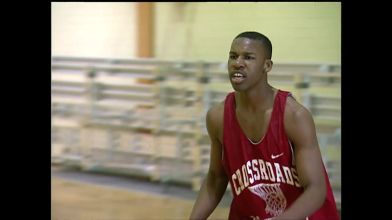 Davis’ grandparents convinced him to go play at Crossroads High School when he was younger. It was a private school that was mostly Caucasian, wealthy kids. Davis stood out compared to a lot of those kids because of his athleticism and leadership. He was getting at least 20 calls a day from colleges by his junior year. His senior year, he only added that as fuel to the fire averaging 26 points, eight rebounds and seven assists. Davis would get Crossroads a championship and accolades would follow. He garnered Gatorade Player of the Year and McDonald’s All-American by the end of the year. Then came the toughest decision which would eventually wear on him: his college of choice.

Davis wanted to stay in California to be closer to home, and one school that was calling his name was UCLA. The problem was there was a lot of controversy with that school because of his sister, Lisa Davis, working with the food service department and was gifted a car to get to-and-from work. Baron was caught driving the vehicle, and an investigation was pursued. Even though that caused a lot of stress on him and the family, he still chose UCLA to be closer to friends and family that could watch him play. 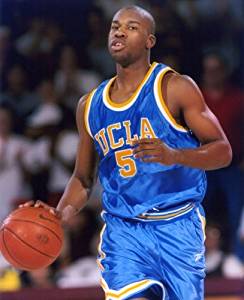 Davis walked into UCLA as a flashy, athletic Point Guard who can dunk, but also play defense and be a leader. But during his first year, things were shaky due to undisciplined play from everybody. It was a team full of guys trying to make it into the NBA, on top of a new Head Coach being there. Things got scary from there, as Davis’ life might have been ruined before his very eyes. In the second-round of the NCAA Tournament, he came down on a dunk and tore his ACL in his left-knee. He was be carried off of the court, with questions as to if he would ever be the same guy again. The biggest part of Davis’ game was his athleticism, that’s what made head’s turn. Now that could all be taken away.

He came back his sophomore year after missing the first four games like nothing ever happened. Davis became the leader of that team, being more involved with handling the ball and a big responsibility of being a two-way player. He would end the season averaging 15.9 points, 5.1 assists, 3.6 rebounds and 2.5 steals. There was lots of promise for this team to make a big-run, but were shocked. Detroit University gave UCLA a taste of the March Madness upset, as they lost 53-56. Although it was a disappointing season for the Bruins, Davis was becoming a big commodity for the NBA. He set his sights to his dreams of being an NBA player. Davis decided to fore-go his final two years to enter the 1999 NBA draft.

With the two first teams in the NBA draft (Bulls and Grizzlies) set on who they wanted to grab, the Charlotte Hornets would be up next. They were in need of a Point Guard, and honestly someone that was exciting to watch. Baron Davis seemed to fit that mold to perfection, but there was one problem. Davis wanted nothing to do with the Hornets. He wanted to be apart of the Clippers, where he would be in his hometown and stay around family yet again. However the Hornets took a risk on Davis, as they had too much belief in him. His rookie season, Davis was coming off the bench to backup David Wesley. He only averaged 5.9 points on the season, but the Hornets would finish 49-33 and face the 76ers the first-round. They would get eliminated in four games, but the team had high hopes for Davis moving forward. 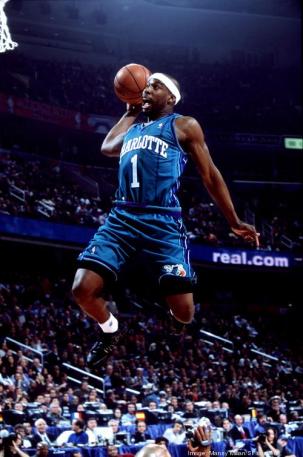 The 2000-2001 season is when Davis would finally get to be the starting Point Guard for the Hornets. Things started to look up for the Hornets as they also brought in Jamal Masburn and PJ Brown from the Heat. People quickly started noticing his skill as a defender and an all-around Point Guard. Davis would get recognition for his hops, as he entered the dunk contest that year. He would finish the season with 13.8 points and 7.3 assists and the Hornets would finish the season 46-36, and play the Heat in the playoffs. They would end up winning the sweeping the Heat in the first round, which meant an exciting match-up with the Bucks. It was a series of back and forth, where the Hornets would actually take a 3-2 lead, but would lose the last two games to get eliminated. However, Davis had his best game in game 7 scoring 29 points on 19 shots, six assists and two blocks and steals. It was a good sign of things to come for this team despite the loss.

Things started to get a bit dicey for the Hornets, as rumors got out that they could be moving the franchise our of Charlotte. Fans started to rain “boos” at home games, and the Hornets never felt they had a home-court advantage. That didn’t stop Davis however, as he was honored with being an All-Star in 2001-02 season. He once again raised his stats to 18.1 points and 8.5 assists a game. With all of the great things happening to Davis, the team still didn’t play at their best due to injuries with the rest of the roster. They would finish the year 44-38, but still make the playoffs. That is when Davis shined, the first-round against the Magic where they won in four games and he would have two triple-doubles in that series. Unfortunately, the Hornets would run into trouble against the Nets and lost in five games. Davis was still spectacular, scoring 20 points a game and recording seven steals in two games. He gave Jason Kidd trouble, but with an unhealthy roster going up against the stout Nets, Davis’ play wasn’t enough. He was on the cusp of being a superstar though, things were lining up for him. 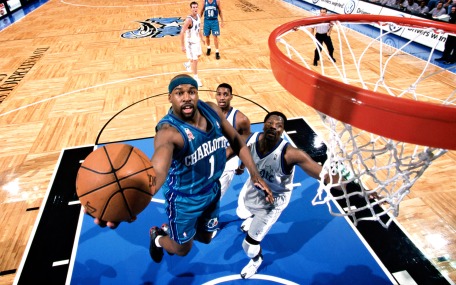 Then the USA Basketball team of 2002-2003 happened. They ended up coming in sixth place, which was pathetic by most people’s standards. A lot of the focus was on Davis because he was perceived as “selfish” by the league. They connected his big pay-day of six-years, $84 million with the fact that he took too many shots. His leadership came into question, and it didn’t get any better when he missed games. You combine that with the team re-locating to New Orleans and you have somewhat of a mess with Davis. They would finish the season 47-22, but would get knocked out by the 76ers in the first-round. He was not very good that series, and left a lot to be desired. If Davis wanted to gain that super-stardom back, he would have to come-back stronger than ever.

Just like that, he got himself into incredible shape and was ready to take on the 2003-04 season. But once again, obstacles stood in the way. Stephen Silas ended up being fired for Tim Floyd, and Davis was not a fan. Then came more injuries to Mashburn which would end his season completely. Jamaal Magloire and others stepped up, but Davis was the key factor. He brought his scoring to 22.9 points a game, along with 7.5 assists and 2.4 steals. Davis would earn himself another All-Star to his resume and grabbed an All NBA Third Team for the season. However the season ended on a very sad note. Davis would go down with back spasms in game-7 and the Hornets were eliminated in the first-round vs the Heat.

The next year Floyd would be fired for Byron Scott, and they would move to the West. The team would be horrendous, and just like that in the middle of the 2004-2005 season he was traded to the Warriors. His career as a Hornet wasn’t other-worldly, but time and time again he gave the fans a reason to cheer. And so would began a new chapter, to the Bay area.

This was another team Davis didn’t have much interest in, but he was back in his home state. That was good enough for him, and was up to the challenge of fixing the Warriors. His first full season there was a disaster, as Davis suffered an ankle injury that would sideline him for the last 18 games of the season and the team would miss the playoffs. But the very next season, things would change for the better. Don Nelson was hired as a Head Coach for the Warriors and Davis and Josh Richardson would get some help. The Warriors made trades to bring in Al Harrington and Stephen Jackson and they knew they’d get a shot at the playoffs. 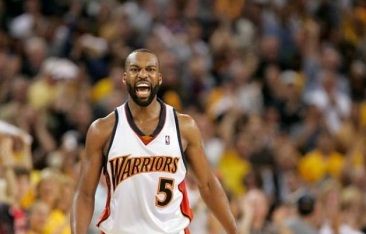 The problem lied that they were the 8th seed and had to go against Dirk Nowitzki and the Mavericks. They won 66 games that year and Nowitzki was the MVP for that season. The Warriors led by Davis would not fold to this team, they were going to fight until the end. Jackson and Davis held it down defensively and Davis and Richardson were major factors offensively. Warriors won the series in six, making Nowitzki and Josh Howard uncomfortable all series long. It was a miracle of a series, making the theme being “We Believe Warriors” so popular throughout the NBA world. Even though the Warriors lost the next series to the Jazz in five, we still got the iconic Davis dunk on Kirilenko. This Warriors team brought hope to a team that devoid of it for a long time. Davis ended the season with 20.1 points, 8.1 assists and 2.1 steals per game.

The next season the team’s record got better, but so did the Western Conference. They won 48 games, but the minimum for that season was 50. With Jackson missing games to a suspension and a slow start to the season hurt them from making another historical playoff run. That would be Davis’ last season with the Warriors and scoring 20 points per game. He gave a lot to that organization, you wish he ended on a high-note for his career. 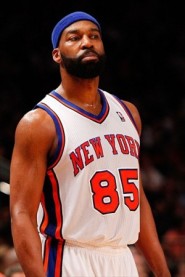 Looking back on the last five years of Davis’ career, you can tell the decline was happening. He got to play for Clippers, who were atrocious from top-to-bottom which included a wonderful man in Donald Sterling. Then the last two years he played very little with the Cavaliers and then the Knicks. Davis’ last year in the NBA with the Knicks ended it in him tearing his ACL and MCL along with a partially torn patella tendon. The athletic, energetic Point-Guard was taken down due to injuries for a good portion of his career. He wasn’t racking up accolades and titles, but he put on a great show every single night.

His times with the Hornets and Warriors had some fantastic memories. Baron Davis wasn’t a dead-eye shooter, but he was a deadly scorer and creative passer at the best times. Davis was something we hardly seen before; a Point-Guard who was fearless when going to the basket and built like a bulldog. He had the heart of a lion and made some fantastic moments come playoff time. His time on the court was cut short due to injury and being on terrible teams at the end. But he came in with a goal in mind, and succeeded. Stay alive each day and show that the ballers from Los Angeles weren’t soft.